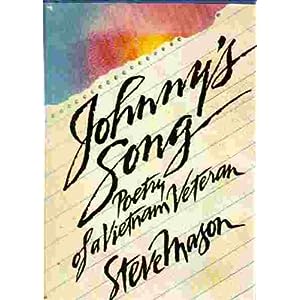 When he died at age 65 in May 2005, Steve Mason’s obituary appeared in newspapers across America. Virtually all of them noted that Mason was “the poet laureate of the Vietnam Veterans of America whose searching blank verse was read at the dedication of the Vietnam Veterans Memorial in Washington, D.C.” That line, repeated nationwide from the Los Angeles Times obit, set the theme for an outpouring of journalists’ tributes to a war veteran who wrote his way out of despair.

Nearly 20 years earlier, an astute reporter in Chicago described how Mason burst onto the literary scene several years after the end of the war in Vietnam with poems that seemed to speak for a generation of veterans—poetry that Bantam Books published in a mass paperback run of 50,000 copies of Johnny`s Song: Poetry of a Vietnam Veteran, which the Chicago scribe noted was “an extraordinary printing for a first book of poetry.”

“Steve Mason says his poems appear in print pretty much as they spilled out of his pen, undecorated by afterthought, uncleansed by revision. He calls them raw meat,” Chicago Tribune reporter Mary T. Schmich wrote in an extraordinary feature story published in June 1986. The title of her article was taken from a Mason poem: ‘A Lot Of Good Men Died In Vietnam. But Like Some Of You, I Was Born There. So Sometimes (like You) I Just Get Tired Of Waiting For Me To Feel Like Me Again...’”

And then she pulled from her interview with this raw poet, who professed not to read much poetry, essential details of his story:

“Once home, he discovered that Vietnam had become the only world he understood; he asked to go back. The Army sent him to officers` training school instead, with the promise of a return to the jungle later.

“In 1969, with the rank of captain and without having gone back to Vietnam, he left the military. ‘I got divorced, resigned my commission and went to live in a ghetto in Washington, D.C. I just smoked cigarettes and lived in the ghetto for six months and the newspaper boy brought me food.' ... He became a full-time Vietnam vet, obsessed with sifting sense from the confusion that had followed him home. His major occupation for almost two decades was the unpaid one of brooding.

“He decided writing might help, though he had done little of it. He chose poetry for its economy and intimacy, despite his inexperience with the form. ’I thought what I`d do was dehydrate the experience so that each person who read the poems would be adding the hot water of their own experience in Vietnam and could serve it up themselves at proper strength,’ he said. ‘I thought only poetry could do that.’”

Schmich summed up her insightful interview with a memorable detail that obituaries recalled when Mason died of lung cancer in Ashland, Oregon.

“He writes his poems in a single sitting, though that fact tells only half the truth. In the years before he found the focus to put the poems on paper, they had been inventing themselves inside him. His long poem ‘The Last Patrol’ took a mere 14 hours to write; he prefers to say it took 17 years and 14 hours.”

And then she added a zinger that propelled this story of a seemingly accidental poet into another realm:

“He had expected to find himself through the poems. ‘Instead of me,’ he said, ‘I found us.’ He discovered a collective conscience, a voice that transcended his private experience and became the voice of the generic veteran. The pleasure he derived from the poetry came not from a solitary exorcism but from the contribution he could make through his words.”

The Day After: Election Results and War Issues

The day after Iraq war veteran Jason Castle lost his long-shot challenge in the primary election for the 5th Congressional District in New Jersey, news reports did not even mention his signature stance that it’s time to bring the troops home from Afghanistan.

In the wake of primary elections in New Jersey in which Castle got 35 percent of votes in a three-way race to challenge the incumbent, Republican Congressman Scott Garrett, a news reader could be forgiven for not having a clue as to what former Marine Sgt. Castle was about in seeking voters’ nomination to run for Congress. The winner, with 55 percent of the vote, was Adam Gussen, who ran on his record as a Teaneck Township Council member

Meanwhile, the news from Afghanistan noted that suicide bombings and a NATO airstrike on a village made Wednesday “the deadliest day for Afghan civilians so far this year,” according to The New York Times.

Oh, and by the way, US military fatalities from a decade of fighting in Afghanistan approached or topped 2,000 this week (depending on various listings)—although that was hard to find in news reports. And, as we know from periodic reports, thousands of veterans of the wars in Afghanistan and Iraq are unemployed, homeless, suffering from traumatic injuries. On average, 18 veterans commit suicide every day.

“More than 6,500 veteran suicides are logged every year — more than the total number of soldiers killed in Afghanistan and Iraq combined since those wars began,” The New York Times reported in April. “One reason for veteran suicides (and crimes, which get far more attention) may be post-traumatic stress disorder, along with a related condition, traumatic brain injury…Estimates of post-traumatic stress disorder and traumatic brain injury vary widely, but a ballpark figure is that the problems afflict at least one in five veterans from Afghanistan and Iraq. One study found that by their third or fourth tours in Iraq or Afghanistan, more than one-quarter of soldiers had such mental health problems.”

According to local news reports, barely 30 percent of registered Democrats voted in Bergen County, the heart of the newly redistricted 5th Congressional District. The other 70 percent presumably could care less who represents them in Congress or how things are going in a war that’s primarily kept going by Republican saber-rattling in Congress.

Yet in the neighboring 9th Congressional District, two incumbent Democratic members of Congress, competing for a newly redistricted seat, hotly debated who could push harder for a quicker end to US combat operations in Afghanistan. The Obama administration plans to hand military operations over to the Afghanistan government in 2014, while starting to withdraw a large number of troops over the next year.

“I’d like to accelerate that withdrawl,” Rep. Bill Pascrell Jr. said during a debate last month at the Ethical Culture Society of Bergen County in Teaneck. “We do need to help our own people,” he said, referring to redirecting war funds to job-creation and other issues at home. Rep. Steve Rothman countered that he recently voted for the Barbara Lee amendment to the defense bill, which would limit funding for the war in Afghanistan to “the ‘safe and orderly withdrawal’ of U.S. troops,” as CNN reported on May 17.

“Lee's amendment to withdraw troops was defeated 113-303, but it did demonstrate the willingness, again, for a significant number of Democrats to split with the president on his war policy - over a hundred Democrats voted for it,” CNN noted.

On Tuesday, Pascrell defeated Rothman in the Democratic primary election. The stance on Afghanistan by both incumbents was, no doubt, nudged by public attitudes. Support for continuing the war tanked in the polls earlier this year.

“According to the CBS News/New York Times survey, many Americans would like to get troops home sooner. Forty-seven percent of Americans said they would like to see the timetable for the departure of U.S. troops moved up. Thirty-three percent think the schedule for withdrawal should remain as is, and 17 percent think the U.S. should stay in Afghanistan for as long as it takes,” CBS noted in March.