Counting Up the Costs of War 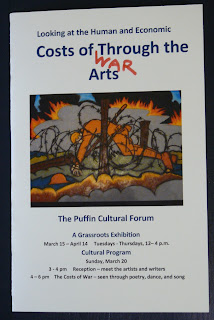 How many ways need it be said? is going broke—and has become imperious, callous and cruel—waging wars around the world. A group of concerned citizens in and set out recently to visually convey the costs of war for our nation. The result is a mind-boggling array of art work displayed at the Puffin Cultural Forum in .

The “Looking at the Human and Economic Costs of War through the Arts” exhibition on display through April 14 includes paintings, drawings, sculpture, photographs, poetry, dioramas and posters by war veterans, military family members and other concerned taxpayers, artists, writers, teachers and students about various aspects of wars’ costs.

Among the most memorable items is a carefully crafted prosthetic leg lent by a World War II veteran, Bob Levine, who lost his lower right leg from grenade wounds in 1944 in , . The VA-issued replacement leg is part of a multi-media display of photos, drawings, newspaper clippings, tables of statistics and a diorama conveying the destructive effects of landmines and other explosives on arms and legs of multitudes of maimed survivors of war zones around the Earth.

“The Million Dollar Soldier,” another diorama made from a US Army camouflage uniform crafted for war in Afghanistan, vividly displays another side of the costs of the conflict in that part of the world. Pinned to the fashionably designed combat jacket are oversize price tags for the cost per soldier per year of keeping an army fighting for nearly a decade halfway around the world in equivalent dollar amounts to the tax bills to local residents for running the municipality and public schools of .

The cost in lives in the war on terrorism is represented by a display of poetry and photos conveying former resident John Fenton’s tormented grief over the death of his son Matthew, who died in May 2006 of wounds received as a Marine in .

Costs in torment to war survivors and family members is the subject of many of the art works. Nightmares are evoked from images torn from military actions around the globe. “A few years ago if I’d seen that piece I’d have run out of here,” poet Dayl Wise said of a mixed media painting by Ruth Bauer Neustadter of a precariously standing man rendered as a jumble of parts and bones. Wise read to a standing-room-only audience a pair of haunting poems—about losing his sturdy jungle boots when he was wounded in and, decades later, suddenly seeing dead Vietnamese farmers amid the “road kill” as he drove on a highway near his home in . 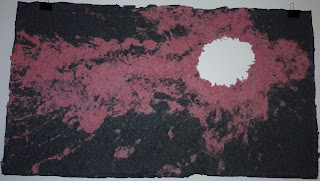 
Other work addressing the corrosive impact of post-traumatic stress on war survivors includes a raging display of Combat Paper artwork made from shredded military uniforms by war veterans, including Robynn Murray, featured in the Oscar-nominated film, Poster Girl. Another piece along these lines is a "Costs of War" poster incorporating a poem I wrote, with calligraphy by Drew Cameron of Combat Papermakers, hand-printed on paper made from military uniforms. 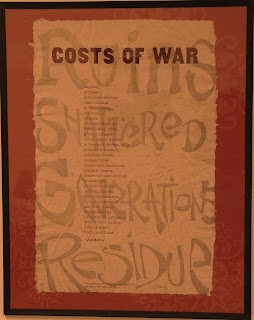 To convey a fuller view of this exhibition’s arresting visual impact, I created a Shutterfly photo album of the artwork and performers who appeared at a Costs of War cultural program on March 20. My poem on this topic is below.

At the Movies: A Veteran’s War

It was a long way from a machinegun mount in a military convoy in Baghdad. Robynn Murray’s getup was very elegant on Sunday at the Academy Awards in Beverly Hills, California. What made her stand out from the famous movie stars at Hollywood’s gala event was the brace of tattooed pistols perched on her chest atop a stunning black and gray dress.

Murray, a former Army sergeant, was there because “Poster Girl,” a documentary about her home front battles as a combat veteran of the war in Iraq, was a contender for the award for short documentaries. Despite its title—with an allusion to the Hollywood pinup girl photos of World War II—“Poster Girl” was one of the few films in the Academy Awards lineup that was very different from typical movie fare. The quick flickering of a few scenes from the film, before the Oscar was—dramatic pause—presented to another short documentary (“Strangers No More”), did not begin to convey how different this film is from standard Hollywood flicks about war as scary entertainment.

As the 38-minute documentary by director Sara Nesson shows, the aftermath of war is sometimes brutal for survivors. This film, a review in the Burlington (Vermont) Free Press noted, profiles “a high school cheerleader and National Merit Scholar from Buffalo who enlisted in the Army Reserve at age 19 to work in a civil affairs capacity. Along with two female colleagues, she posed for the September 2005 cover of Army Magazine — hence the title of Nesson’s film. But beginning in May 2004, the military had Murray wielding a machine gun from the turret of a Humvee that was taking sniper fire. She returned home with wounds and post-traumatic stress disorder.”

The film unflinchingly shows Murray back home in Niagara Falls, NY punching walls, kicking her car door and having a panic attack on camera, amid rambling talk about the times she wanted to commit suicide. Here’s a scene from the movie, as captured by Cythnia Fuchs in a review for PopMatters:

As Robynn recalls entering a home where a family has been shot and killed, she emphasizes the blood on the walls and mattresses. “They got shot in their sleep,” she says, then reflects on her own lack of response at the time: There was this piece of bread,” she recalls, “And there was this piece of brain on it.” Sent to assess the scene, she did just that, until she remembers walking up the stairs and seeing a bloody handprint o the wall. Here Poster Girl shifts time and place, pulling you into Robynn’s sense of lurching up the stairs: her steps are heavy, the camera pitches. The camera arrives in the attic of Robynn’s mother’s home, where Robynn is punching the wall, with boxing gloves. She slams through the surface, then reflects again: “Oh, that’s a problem,” she observes, as she sinks to the floor, beginning to sob. You hear more steps approaching. Her mother, Ann Marie Hacker, comforts her.

Going beyond the usual filmmaker fascination with lives descending into destruction, the documentary also shows her determinedly finding a path to recovery. Rebuffed by the VA, which lost her application for assistance, she found an activist path to another, better stage of life. As the Burlington Free Press noted, “Murray … discovered that her anguish could be ameliorated by making combat paper [artwork from shredded military uniforms]; penning poetry for the Warrior Writers, an initiative that provides opportunities for vets to articulate their experiences; and becoming an activist with Iraq Veterans Against the War, of which she is now a board member.”

Finding a network of assistance for healing from hidden wounds can be hit or miss. Robynn Murray stumbled across a compatible group of veterans and supporters who work together to transform tough times in their lives into artwork, poetry and other forms of creative expression. “Warrior Writers saved my daughter’s life,” her mother said to a circle of audience members at a recent showing of “Poster Girl” in New York City.

Hollywood movie-makers seldom get so close to filmed experiences that come that near to real life saved from the relentless jaws of death.