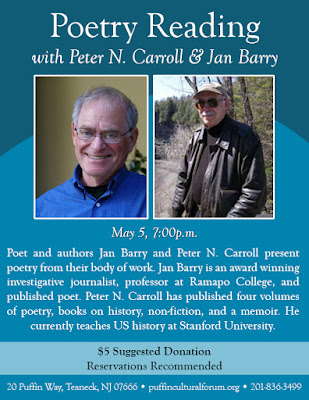 I am honored to be doing a poetry reading with Peter Neil Carroll at Puffin Cultural Forum in Teaneck, NJ on Friday at 7 pm. I'll be reading from a new collection of my poems, Earth Songs II, that I'm aiming to publish shortly. Peter will be reading from his new work, Truth Lies on Earth: A Year by Dark, by Bright.


Peter teaches U.S. history at Stanford. In addition to four collections of poetry, he is the author and editor of numerous works on impacts of historical events, including From Guernica to Human Rights: Essays on the Spanish Civil War, Keeping Time: Memory, Nostalgia, and the Art of History  and The Odyssey of the Abraham Lincoln Brigade: Americans in the Spanish Civil War. He has also taught creative writing at the University of San Francisco, hosted "Booktalk" on Pacifica Radio, and edited the San Francisco Review of Books.


Peter likes to travel around America and write poems about head-scratching things he encounters. Here’s an excerpt from “Birds of Dakota” in his collection Fracking Dakota: Poems for a Wounded Land:

Old Highway 2 leads to a steel fence
far off the road. Circular tracks wait
for the mobile multi-warhead vehicles.

The officer looks twice, head
to toe, decides to tell me the story
of a farmer pestered by blackbirds.

You see, he fired three shots
into a peach tree, a flock of helicopters
landed, soldiers asked him questions.
…..

Memories of My Dad

As many of you may know, my father didn’t much like Democrats—but he managed to tolerate his John Kerry-buddy-Al Gorish-Obama-supporting-Hillary-uggh-voting oldest son. My Dad had very strong beliefs—until confronted by confounding facts. He loved American cars—Fords, Chevvies, Hudsons, you name it, he loved tinkering with it—until he discovered Toyotas. He didn’t much like Japan, having served in World War II, but he loved Toyota’s cars.

My father was a complicated man. He didn’t attend college, but he filled our house with books. And he seemed to have read them all—plus piles of magazines, newspapers, tourist brochures, and maps. My Dad had a map for virtually every state, and every county in upstate New York—in many cases, maps going back to the 1930s, when his father was a highway engineer and state parks engineer. On one old map, Dad noted the route he and his brother Ed took in riding their bikes from Jacksonville around Seneca Lake and back home—in time for supper, if I recall the story right.

From the time he was a kid, Jack loved to drive cars. In “retirement,” he drove cars for Maguire and other car dealerships—cars that needed to be taken for trade to other dealerships across New York state, Pennsylvania, New Jersey, New England.

Many of us here may recall the time my Dad said “let’s go for a drive”—and, as he narrated the history of everything of interest we passed, we’d end up at Niagara Falls, or Oswego on Lake Ontario, or Harris Hill, “the soaring capital of America,” where gliders swooped over the magnificent terrain near the Pennsylvania border.

As everyone knows, my Dad loved to tell stories. No doubt, you have at least one favorite story you heard him tell.