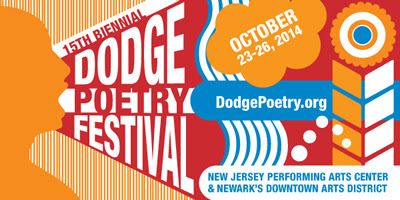 A literary troop from Warrior Writers and Combat Paper will take the stage Saturday, October 25, at the 2014 Geraldine R. Dodge Poetry Festival at the New Jersey Performing Arts Center in Newark, NJ.

The group will be reading in a featured event at 8:15 p.m. billed “Another Kind of Courage,” with performances by poets Yusef Komunyakaa, Charles H. Johnson, Brian Turner and others who are military veterans or military family members.

Selections of their work are included in a new anthology, Warrior Writers: A Collection of Writing and Artwork by Veterans, and previous works published by Warrior Writers, a nonprofit arts organization based in Philadelphia, PA.

Martin Farawell, Dodge Poetry Director, chose the theme of “Another Kind of Courage” to honor the transformational work that many veterans and military family members have made in turning anguish into art.

“Classic war stories often evolve around finding the courage to enter battle, but there is another kind of courage required of veterans and their families as they face the impact and aftermath of war: The courage required to acknowledge trauma; to turn with love toward those transformed and wounded by war, including ourselves,” Farawell said.

Warrior Writers is a veteran-focused arts organization whose mission is to give voice to veterans’ experiences, provide a creative community for artistic expression, and bear witness to the experiences of warriors through casual, welcoming workshops held at colleges, art galleries and other sites around the nation.

Combat Paper, a program of the Printmaking Center of NJ, holds papermaking workshops in which veterans turn their uniforms, memories and experiences into art. A Combat Paper art exhibition, “Trigger Experience,” is currently on display at the Morris County Administration Building in Morristown, NJ through January 6.

Jan Barry, of Teaneck, NJ, is a poet, journalist and author of Life After War & Other Poems (Combat Paper Press) and co-editor of Winning Hearts & Minds: War Poems by Vietnam Veterans, among other works. He served in the Army in Vietnam.

Kevin Basl, an Army veteran of Iraq, earned an MFA in fiction from Temple University. He is a workshop facilitator with Warrior Writers and Combat Paper NJ, based at the Printmaking Center of New Jersey in Branchburg, NJ

Jeremy Stainthorp Berggren,  a Marine veteran of the Iraq War,  is a writer, poet and visual artist. He is included in an upcoming documentary about spoken word artists in the triangle area of North Carolina

Chantelle Bateman, of Philadelphia, PA, served with the Marines in Iraq. A poet, artist and writer, her work has been featured in the film “Out of Step,” Warrior Writers anthologies and the National Veterans Art Museum.

Lovella Calica is Director of Warrior Writers, based in Philadelphia, PA. She is a poet and editor of Warrior Writers, After Action Review and other anthologies of writings and artwork by military veterans. She received three Art and Change grants from the Leeway Foundation and was honored with the Transformation Award in 2009.

Hugh Martin, an Ohio National Guard veteran of the Iraq War, is author of The Stick Soldiers and So, How Was the War? Recipient of a Wallace Stegner Fellowship, he was the inaugural winner of The Iowa Review Jeff Sharlet Award for Veterans. He is currently the Emerging Writer Lecturer at Gettysburg College.

Jennifer Pacanowski, of Allentown, PA, served in Iraq as an Army combat medic. She is a public speaker, poet, playwright and writing facilitator for Warrior Writers.

Carlos Sirah served in the Army in Iraq. He studied Performance at Fordham University and is currently pursuing an MFA in Writing for Performance at Brown University. He is a playwright and actor.

Jon Turner is a Marine veteran of the Iraq War and a humanitarian mission to Haiti. He is a poet, visual artist and director of the Center for Healthy Change in Vermont.

Eli Wright, an Army veteran of Iraq, is an instructor for Combat Paper NJ, providing workshops for veterans and active duty soldiers at VA facilities, military bases, colleges and art galleries along the East Coast from Maine to Virginia.