Imagine that you have to prove your ethnicity when filling out a census form and myriad other forms posing that question in American society. Do you have an original document showing direct lineage from ancestors who lived in a likely distant area of the world centuries ago?

That’s the seemingly impossible to navigate bureaucratic maze faced by members of the Ramapough Mountain Indian tribe, whose quest to prove their ethnic heritage is conveyed in "American Native," a new documentary making the rounds of film festivals and scheduled to open in theaters in September.

"Their history has been written by everybody but themselves," film director Steven Oritt said at a recent screening at the Hoboken International Film Festival, held in Middletown, N.Y.  Oritt and producer Corey Bobker made the independent documentary to help tell that story.

These backwoods folks were mocked by Donald Trump, long before he heckled fellow candidates for the Republican nomination for president of the United States. Belittling the Ramapoughs’ request to be recognized as a  Native American Indian tribe by the federal government, which might potentially gain standing to open a casino closer to New York City than his gambling palaces in Atlantic City, Trump announced on a popular New York radio show—revived in this film—that “I have more Indian blood than they do.”

The federal Bureau of Indian Affairs rejected the Ramapoughs’ claim for lack of historical proof of tribal status, such as a treaty with the fledgling US government.

Who gets to decide who is an Indian is an unsettling question raised by this tiny clan of bow and arrow hunters who talk in a distinctive Appalachian mountain tone, alternately polite, reflective, and bluntly defiant.

Many of these families who live in Hillburn, NY, Ringwood and Mahwah, NJ and neighboring towns have photos that trace their roots to previous generations who lived in the once remote mountains along the New Jersey-New York border, hunting, fishing, working in the iron mines created before the American Revolution, working on horse farms and estates of 19th century wealthy New Yorkers, and then at the massive Ford Motor Co. assembly plant in Mahwah. Among relatives in the photos are sturdy, young men wearing military uniforms of the world wars.

In scene after scene, the film shows repeated insults from the current crop of mansion owners and government officials upset over the notion of a hardscrabble group of self-styled American Indians insisting on reviving their culture and traditions in what is now prime real estate in suburban New Jersey and upscale Rockland County, NY.

On camera, local officials and owners of neighboring mansions try to block tribal leaders from building a log longhouse on a scenic tract on the Ramapo River. An academic researcher dismisses the Ramapoughs’ oral history of rustic life in the Ramapo Mountains passed down by generations upon generations and insists that members of the group are actually descendants of freed blacks who lived in New Amsterdam under the colonial Dutch.

In the unkindest cut of all, the head of the Delaware Nation in Oklahoma proclaims in an interview at his tribal casino headquarters that any Indians who stayed behind in New Jersey rather than be pushed west abandoned any claim to tribal status. Asked about his heritage, the Delaware chief cheerfully states that he is one-eighth Indian.

“I know who I am” is the refrain that weaves through this film. In often impassioned dignity, men and women who grew up in these ancient mountains, listening to stories by grandmothers about previous generations who survived previous pressures to leave these forested ridges, speak for themselves.

Walking Point: A Step into the Unknown


I was dubious when the organizer of a veterans arts program emailed seeking volunteers to participate in a dance workshop. On the other hand it sounded like fun, if not for my wobbly old knees that generally command assistance from a cane or walking stick.

To my relief, Roman Baca and fellow dancers with the Exit 12 Dance Company warmly welcomed a gaggle of geriatric Vietnam vets into the dance workshop Sunday, a part of the Warwick Summer Arts Festival, held at Arthur Finnegan American Legion Post 1443 in Greenwood Lake, NY. Also on the program were a Combat Paper art show and a Warrior Writers workshop and reading, which is what drew most of the participants.

Our informal, pick up dance troupe also included a 60-ish mother of an Iraq War vet, a 40-ish mother who served with a US Army field hospital in a long-forgotten war in Somalia, and a 30-ish female festooned with tattoos commemorating service as a combat medic in Iraq.

Shuffling into the formation for dance warm up exercises felt like walking point on patrol into unknown territory. Even more so than usual, I had to concentrate on every step, trying to anticipate potential hidden dangers. At my age, losing balance and falling is an always lurking menace—as happened recently to a fellow vet laid up from injuries from a misstep in his own home.

Baca, a professional dancer who served in the Marines in Iraq, and his dance crew guided us through warm up moves that brought back memories of a suddenly imposed PT drill one humid morning in Vietnam, amid sleepy air crews grumbling about being subjected to jumping jacks, push ups and other strenuous exercises last encountered in basic training.

In this case, however, we were advised not to do any movement that felt uncomfortable. The idea, Baca explained, was to tell memorable personal stories in creative movements.

“They take away your identity in the military,” he said. The idea that came to him, which is the core of the dance company he created after military service, is to reclaim affirmation of yourself and address troubling experiences in creative ways.

A fun way of doing this, he demonstrated, is conveying your first name with arm and hand and body gestures—and then sharing this with a circle of other folks, each adding a creative twist or flair. And then speeding up the action of repeating everyone’s name/moves to make a flowing set of movements.

Creative juices flowing, we were assigned in groups of three to tell a memorable story in our life through dance movements. For me and others with knee or ankle issues, this meant thinking about making moves that were expressive without being disastrous. It was a real life exercise in thinking on your feet.

Later in the afternoon, after the writing workshop and reading to the assembled audience, we presented our dance movement renderings. Writhing arms, legs and bodies conveyed the best we could pent-up emotions from war and uneasy peace.

It was an exciting melding of writers, artists and dancers addressing hard-to-express events. It was an adventure that, for me, pushed some previously accepted limits, with no injuries. I’d like to do it again.

Since forming the dance company in 2007, Baca and fellow dancers have performed and done workshops with vets and family members in New York City and around the country. As he told a San Francisco journalist earlier this year: “Like many returning veterans, Baca found that the re-entry period to normal civilian life was ‘incredibly difficult. After six months, my girlfriend, who is now my wife (Lisa Fitzgerald, who is also a dancer with Exit 12), sat me down and said, 'You’re not OK. You’re angry, depressed, anxious.’

“She wanted to help me and said, 'If you could do anything in the world, what would you do?’ ‘I said, 'I’ve always wanted to start a dance company.’ So we gave it a shot.” 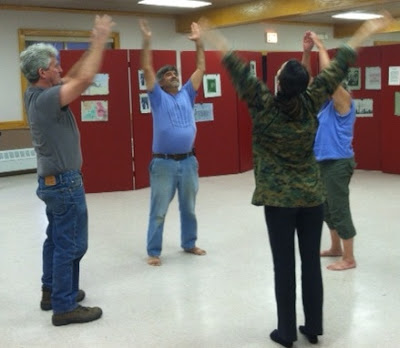 There was a memorial service in Chicago today for Dave Curry, a long-time leader of Vietnam Veterans Against the War. I learned of his death and memorial service in an email this morning. I’m sorry to say I didn’t know Dave well, living and working as I have mostly on the East Coast, but his life exemplified what remarkable, life-long civic activists grew from this dissident group of ticked off war veterans.

“Few people at the University of Missouri-St. Louis knew that respected criminology professor David Curry had been sentenced to 34 years in prison on federal drug charges. Or that, years later, he had been granted a rare presidential pardon,” the St. Louis Post-Dispatch noted in its obituary on Curry’s death in April, at age 66, of congestive heart disease. He also suffered from Parkinson’s disease and hepatitis C, two other maladies that have afflicted many Vietnam vets.

The arc of his life was like a movie plot, former academic colleagues stated in a tribute on the American Society of Criminology website. Growing up in an impoverished coal-mining family, “Dave never finished the twelfth grade, but his test scores were so high that he was admitted to a community college and then the University of Southern Mississippi without a high school diploma, earning a B.S. in Sociology (with a minor in Mathematics)  in 1969,” noted former collegiate colleagues Bob Bursik and Jim Lynch. “Since he was supported at USM by an Army ROTC scholarship, he was obligated to serve a tour of duty.  He was sent to Vietnam as an intelligence officer and eventually was promoted to captain.

“Upon his return, he enrolled at the University of Mississippi, where he was awarded an M.A. in Sociology in 1973.  In addition, greatly disillusioned by what he had experienced in Southeast Asia, he served as the Mississippi state coordinator of the Vietnam Veterans Against the War. Upon completion of his degree, he enrolled in the doctoral program in Sociology at the University of Chicago in 1973 (when and where we first met him), graduating with his Ph.D. in 1976.

“His odyssey becomes even stranger at this point. He accepted a tenure track position in the Department of Sociology and Anthropology at the University of South Alabama, achieving the rank of Associate Professor and serving regularly as an expert witness for the local NAACP- affiliated law firm and the Southern Poverty Law Center.  He also intensified his work with the VVAW.  These activities did not sit well with the Alabama political power brokers and they assigned a Special Agent from the Alabama Bureau of Investigation to go undercover with the VVAW in an effort to take Dave down.”

One drug sting later, Dave Curry was convicted of cocaine distribution and sentenced to 34 years in prison. That’s the kind of heat VVAW and other social activists faced in the 1960s and 70s. But Dave had a lot of supporters, who got him out of jail, back into academic work, and convinced President Bill Clinton to issue a pardon in 2000.

“Upon his release, Dave accepted a position at West Virginia University (1989) and then joined the CCJ faculty at UMSL in 1994,” Bursik and Lynch noted. “At that point he already had garnered international acclaim for his work in military sociology and his studies of street gang activities, which later expanded into a focus on youth violence in general. Not only did he continue to be a prolific researcher but he was highly devoted to his teaching responsibilities and in 2004 received the Chancellor’s Award for Excellence in Service. He also served on the national boards of the Vietnam Veterans Against the War and the Boys and Girls Clubs of America (winning its Advocacy Award in 2001).  He retired in 2011 for health reasons and moved to Mobile, Alabama.”

For more information:
http://www.stltoday.com/news/local/obituaries/dave-curry-dies-umsl-prof-received-presidential-pardon-for-/article_468185ba-6fce-55c2-9b35-5801f317e74f.html
https://asc41.com/obituaries/obituaries_home.html
Posted by Jan Barry at 7:50 PM No comments: