Mike Eckstein joked about his ailments as he talked about scheduling another round of surgery for spinal problems that left him bent over and unsteady without a cane. With a mischievous grin, he traded quips with Frank Wagner, a fellow Vietnam vet and multiple surgery survivor, at a recent Warrior Writers writing workshop at the VA Vet Center in Secaucus. But for the date with a doctor, Mike would surely have made the trek into New York last Tuesday with Vet Center art group members to visit the Museum of Modern Art.

That’s where we learned via a cell phone call that Mike had died in the hospital. He was 74.

Among other things, Mike Eckstein was a walking, talking encyclopedia of hard-earned knowledge about Agent Orange and its monstrous offspring, dioxin. A member of New Jersey’s Agent Orange Commission, Mike testified before government agencies, organized public meetings for vets and family members to speak about their health experiences and hear from experts on emerging information on dioxin health effects, and issued periodic updates on behalf of the Vietnam Veterans of America New Jersey State Council’s Agent Orange/Dioxin Committee.

To cope with his own health problems, Mike was a regular at the weekly art group that met at the Secaucus Vet Center. He created paintings about things on his mind, including Agent Orange spray planes, the Army truck he drove in Vietnam, and baseball, which he excelled at when he was young. More recently, he dropped by the monthly Warrior Writers workshop and wrote sprightly vignettes about memorable experiences in the military and as a kid growing up in The Bronx.

Mike often laughed that he got more paint on his clothes than on the canvas. A numbers guy who retired as a corporate chief financial officer, Mike could nail a spreadsheet but struggled with drawing a straight line. His artistic strategy, deployed by many of the paint brush wielding vets, was to paint over mistakes with layers upon layers of acrylic. The result was a vibrant rendition of a vet’s memory. Many of these pieces were hung in various art shows including at the Brennan Courthouse Gallery in Jersey City and Puffin Cultural Forum in Teaneck. 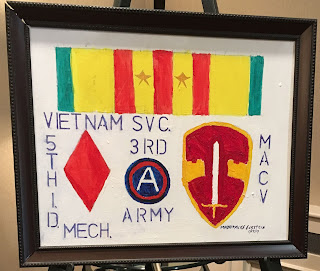 As noted in the Star-Ledger obituary, Mike was “the beloved husband of Susan (nee Segal), devoted father to Craig (Tricia), Matt (Jim), and Cindi; cherished grandfather (Elmo) to Danny, Maya, Alex, and Martin; loving brother to Stanley and also leaves many nieces and nephews.”

Some of his art work was on display at the funeral home.

One of Mike’s best talks about his life and the debilitating health effects of Agent Orange was posted on YouTube. See it here: