Despite anxiety, depression, post-traumatic stress disorder, sleeplessness, night vision problems and other health woes, a group of military vets trekked through Friday night traffic to cheerfully commemorate a public display of their art.

An array of paintings, drawings, etchings and other modes of illustration is on display like a parade through the campus center at Gloucester County College in Sewell, NJ. The work was created over the past year in art workshops at the Secaucus (NJ) Vet Center and, over a longer period of time, in Combat Paper workshops in New Jersey and other parts of the US. Thirteen vets are represented in the “Healing Arts: Combat Paper and Other Works by War Veterans” show, which runs through April 25. 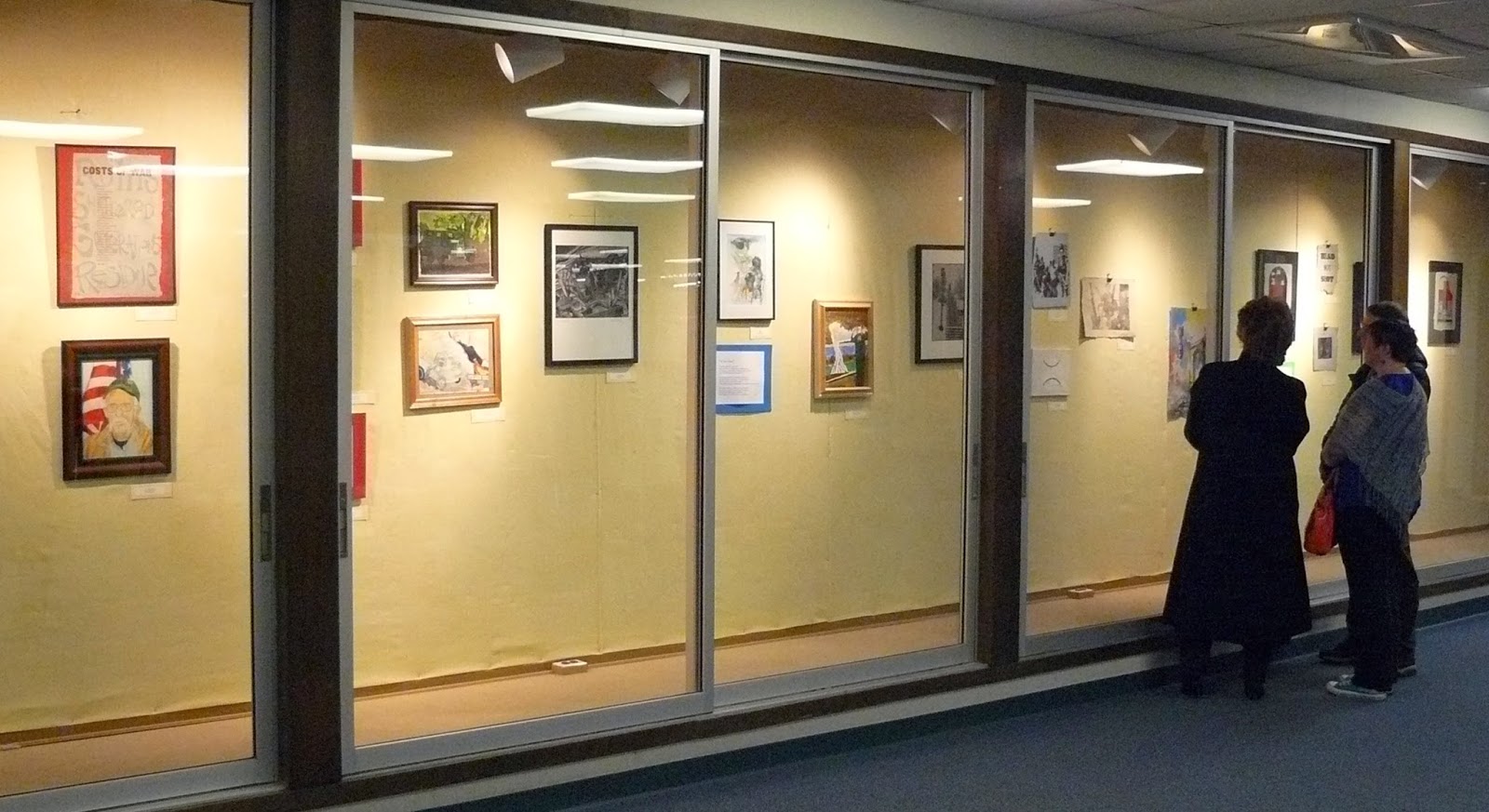 As noted in the program book:

Transforming war uniforms into art in Combat Paper workshops, many military veterans in New Jersey and across the nation have traded the familiar grip of rifles for scissors, carving knifes, paint brushes and other healing implements of art. Meanwhile, veterans attending the “Paint Your Pain” Art Group at the Secaucus (NJ) Vet Center have been exploring a wide variety of media from water colors to pen and ink to oil paintings, to probe, uncover and convey hard-to-express experiences.

The art workshop at the Secaucus Vet Center provides a gathering place for veterans to share art-making and post-combat survivor tips. “After many years of doing talk therapy with veterans, I realized that another more powerful outlet was needed,” said Angela Maio, who recently retired as a family therapist at the Vet Center, on creating the art workshop that has drawn veterans who served in Vietnam, Afghanistan and Iraq. “The ‘Paint Your Pain’ Art Group has had a healing cathartic effect on participants’ combat stressors.  Several members have expressed the feeling of finally finding closure to their nightmares...”

The Printmaking Center of New Jersey’s Program Combat Paper NJ is run by veterans, for veterans. It provides welcoming settings where veterans can explore art to help recover from physical, psychological and emotional effects of war. In workshops at college campuses, community centers, art studios, VA hospitals and military installations, Combat Paper brings the ancient arts of hand-papermaking and printmaking to veterans of all conflicts.  “We deconstruct, reclaim and communicate,” David Keefe, an Iraq war veteran and director of Combat Paper NJ, says of turning old uniforms into paper used to display vets’ art works. “It’s the perfect marriage of concept and medium. It transforms the material, the artist and the viewer.” 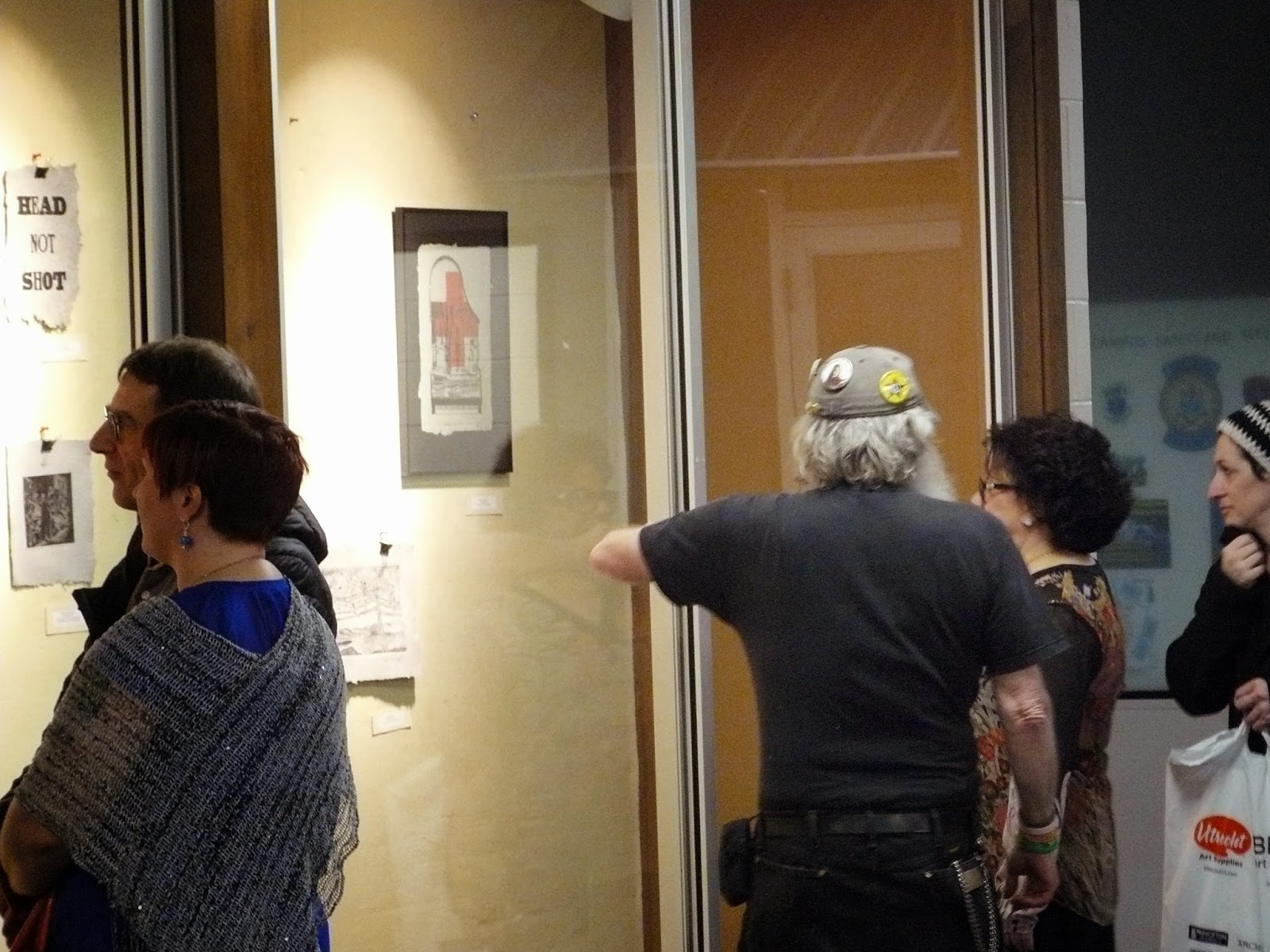 Gallery Director Eoin Kinnarney, who hosted the opening reception on Friday, said many students and staff members at the college were entranced by the vets’ work. Co-host Diane Macris, administrator of the Gloucester County Cultural Heritage Commission, commissioned the exhibition after reading about the “War and Peace” art show and poetry reading that most of these vets presented at the Brennan Courthouse Gallery in Jersey City last fall.