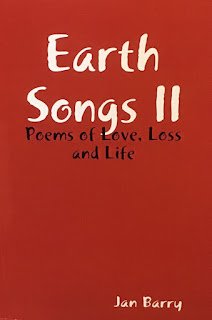 
Ruth Bauer Neustadter’s latest art show invites viewers to participate in a community discussion about what can be done regarding global environmental crises. In many cases, naming and framing an issue to the public is the first step in effectively addressing the problem. In this case, art viewers are asked to help in the framing.

“Turn the Tide: Paintings which Encourage a Conversation About the Future of Mother Earth” opened last night at the Hackensack (NJ) Performing Arts Center with a spirited crowd of about 50 painters, dancers, poets and environmental activists joining an impromptu performance of reflections on her art’s themes.

“This is the most important issue—the state of Mother Earth,” Neustadter said of the event, encouraging audience members to share their thoughts on viewing the mixed-media pieces in this show. The works on display were made from recycled metal, plastic, wood and paper items in brightly painted arrangements. Titles convey the themes of somewhat abstract works: “Endangered Species,”  “Red Tide,”  “Pipelines, Trains, Oil.”

Addressing the theme of a black and white piece titled “Empty Honeycombs,” four dancers stood in a line near the middle of the room, humming as they slowly, slowly, slowly bent forward and collapsed on the floor. One by one, other audience members offered comments on the long-reported decline of honey bees.

I contributed a poem jotted down while contemplating a piece titled “Keep It in the Ground.”

The detritus of dead sea creatures
and decayed vegetation
is sucked out of the ground
and burned to choking smoke
that poisons living creatures
and whacks the balance of Nature
back toward a deadly, prehistoric
time before the creation
of humankind

A man read a friend’s poem, contemplating “Endangered Species”:
“When will it end? Maybe when we become endangered—and it may be closer than we think.”

Turning to what can be done, one of the dancers said she has shifted her priorities to addressing environmental justice issues. Two other audience members talked about raising monarch butterflies on milkweed plants in their back yard and inside their home. A member of the Hackensack Environmental Commission talked about a project to rebuild an old greenhouse in a city park and put it back into use.

A woman announced that a citywide litter cleanup campaign called “Slam Dunk the Junk” is scheduled for this weekend, with civic group members gathering at the Hackensack Performing Arts Center, 102 State St., at 9 am on Sunday, postponed due to an expected rain storm on Saturday.

Another woman spoke out about destruction of rainforests due to clearcutting for beef growing operations, encouraging the crowd to support a campaign asking people to cut the amount of beef they eat. “What if everybody ate half as much—that would make a big difference,” she said.

Neustadter’s son Josh commented that, as an environmental researcher, he’s thought a lot about how to replace plastic—which permeates modern society—with something biodegradable. While that vexing problem is being addressed, he said, people “need to do more with less,” to reduce the amount of castoff junk that doesn’t biodegrade.

Summing up the evening, a woman said she was excited by “the burst of energy that comes from these paintings” and spread through the audience.