Just north of the New York State Thruway intersection with I-287 in Suffern, NY, a large swath of contaminated forest land is being cleaned up by Ford Motor Company. Acres of trees on a slope along Torne Brook, off Torne Valley Road, have been cut down and tons of soil tainted with lead-based paint sludge excavated. Bulldozers are now spreading clean topsoil in preparation for replanting a renewed forest in the spring.

This is the third substantial cleanup in the area of toxic waste from Ford’s former car and truck assembly plant that operated just over the border in Mahwah, NJ from 1955-1980. The current cleanup site arcs around the Ramapo Saltbox Environmental Research Center, which sits in a tiny copse of trees on a rise off Torne Valley Road.

Just before Christmas, in conjunction with the winter solstice, a small crowd of environmental activists, environmental studies professors and students gathered at the center to celebrate the grassroots efforts that prodded Ford’s cleanup work. 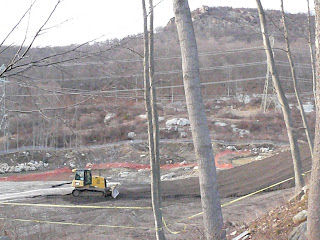 The cleanup site along Torne Brook is in a former sand and gravel pit where trees grew on top of buried paint sludge. Numerous pockets of buried sludge were identified and mapped out by Chuck Stead, a professor at Ramapo College of New Jersey who grew up in the area, with the assistance of students in classes he teaches at the state college.

At the same time, Stead created the Ramapo Saltbox Environmental Research Center, organizing students at a number of schools and programs in the area to rebuild a 19th-century iron workers’ house that was moved to its present location. The current cleanup work is on Town of Ramapo open space lands near Harriman State Park. A municipal recreation center is a short distance downhill from the cleanup site. A long-closed municipal landfill, which was contaminated by industrial waste from numerous companies, is across the road.

In 2007, Ford contractors removed tons of soil contaminated from paint sludge that had been buried in another section of flood plain in a bend of the Ramapo River just north of the former assembly plant. Just downstream are wells for Mahwah’s municipal water system, which serves hundreds of homes, an array of public schools, dozens of restaurants, a number of major corporations and Ramapo College.

Despite the threat to the area’s water supply, the toxic waste from the Ford plant was still in the ground and along streams where it was dumped decades ago, until recently. A campaign to clean it up was sparked by investigative reports by The Record of North Jersey in 2005 and 2006 that examined health concerns by residents of a former iron mining community in Ringwood, NJ where Ford contractors dumped hazardous material for years. The newspaper investigation, which I participated in and periodically updated, also raised concerns about the potential impact of toxic chemicals in the paint sludge on the nearby Wanaque Reservoir, which serves millions of New Jersey residents and businesses.

In response to renewed oversight of the Ringwood Mines Superfund Site by the US Environmental Protection Agency, Ford contractors excavated massive amounts of hazardous waste. Citing that cleanup action just over the mountain in New Jersey, officials and environmental activists in Rockland County demanded a cleanup of Ford industrial waste on the New York side of the border. Officials with the Town of Ramapo, where the bulk of Ford’s waste was dumped along the Ramapo River corridor, were particularly persistent. They gained support from county officials and the state departments of health and environmental conservation, which directed Ford to put together a comprehensive cleanup plan.