Vietnam: Another Kind of Adventure

W.D. Ehrhart has been turning the tragedy of the Vietnam war inside-out, upside-down and sideways in a whirlwind of memoirs, articles, poems, poetry anthologies and travel pieces since surviving the battle of Hue in 1968—and living to ponder what the hell all the death, destruction and desperate encounters in Indochina added up to.

His latest literary foray is an online journal—titled “Ken and Bill’s Excellent Adventure”—of a journey to this summer with a Marine buddy who was also wounded by the rocket explosion that shredded their shelter in a bedroom-turned-battle station. The story of this trip back in time is artfully laid out on a magazine-style website designed by Bill Ehrhart’s wife Anne, who took many of the photos accompanying the text.

As in most Ehrhart stories, there’s an unexpected twist. Ken is the nickname for Kazunori Takenaga, a Japanese citizen who ended up in the US Marines in . And so Bill makes a side trip to to visit Ken’s homeland. And then the two aging war buddies, accompanied by Anne and photographer Sachiko Akama, travel to to re-experience old battlegrounds. Along the way, they also encounter memorable sights and historic sites in two Asian nations— and —that have created vibrant peaceful societies in the wake of wars with .

“As we approached Hue, we crossed the bridge over the An Cuu Canal, just as Ken and I had done on the morning of January 31st, 1968, but the war was nowhere to be seen and there were no ghosts awaiting us, just a vibrant, throbbing city that was almost unrecognizable except for major landmarks like the Truong Tien Bridge spanning Song Huong—the River of Perfumes—Hue University, and of course the famous Citadel,” Ehrhart noted in a suddenly inward shift from describing Vietnam’s current scenery.

“Ken and I and a handful of other Marines had crossed during that first day of fighting, though we couldn’t have told you its name,” he continued. “We had tried to reach the Citadel, but had taken terrible casualties at the hands of hundreds of well-entrenched North Vietnamese firing down at us from windows and walls, and we’d had to fall back to the south side of the river, where most of the fighting took place during the first few weeks of the battle.”

“On another day,” he writes, “we drove from to the old Demilitarized Zone marked by the Song Ben Hai.  We walked—stoop-shouldered most of the way—through the tunnels of Vinh Moc just north of the DMZ, where an entire village of 70 families lived underground for six years to escape U.S. bombardment.

“We walked across the river, from north to south, on the , destroyed by bombing in 1967, but rebuilt post-war for pedestrian traffic.  Several miles to the west of the bridge is Con Thien (‘the place of angels’ in Vietnamese), where Ken and I had spent a month living in a mud-infested, barbed wire-encircled collection of sandbagged bunkers, besieged by North Vietnamese artillery from the north side of the DMZ, but we could not go there because the area, still sewn with American mines, is too dangerous.” 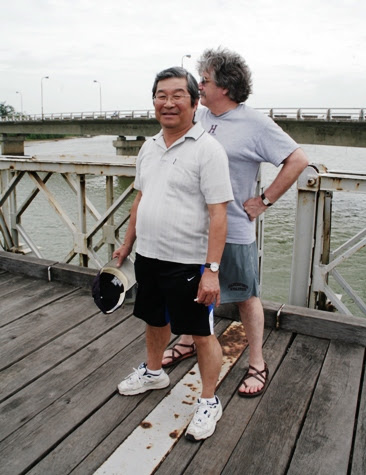 Ken and Bill grin like they won the lottery as they pose for a photo together in the middle of the long-fought over bridge "straddling the 17th parallel at the old DMZ." During the war, Marines couldn’t have imagined walking across that bridge and surviving. Tens of thousands of American soldiers and millions of Vietnamese soldiers and civilians died in the battles over that geographic division.

The highlight of the trip is finding the house where the war nearly ended their lives. Better to let Ehrhart tell what it meant in the way that has made his memoirs and other writings on the war widely read around the world.

“The house, which in 1968 had had a brick wall around it, has since been entirely refurbished,” Ehrhart noted. “Looking fresh, crisp, and bright, it appears to be no older than the six-story four-star hotel built in two sections behind it, the two wings of the hotel forming an L into which the house nestles.  The grass lawn has been replaced by a tiled driveway and parking area with a motorscooter rental operation and an outdoor coffee shop.

“The house itself is now the business and administrative offices for the hotel, the Duy Tan (named for yet another emperor).  A young woman inside who spoke English told us that the hotel had been built in 2004, but the house dated to 1920.  That was the clincher.  This was the place.  We were so amazed to be here, alive and happy and 62 years old (well, Ken is 63), that we did not have the presence of mind to ask if we could go up to the very room itself.  No matter.  This was close enough.

“That evening, Anne, Ken, and I, accompanied by Sachiko Akama, the photographer who traveled with us, went for an evening cruise on the .  On board with us were eight Vietnamese singers and musicians in traditional garb who performed traditional Vietnamese folk music for us.

“When they were finished, they gave us each two paper bags with candles inside.  The tradition is to light the candles, make a wish, and set the bags afloat on the river.

“I cannot begin to tell you how magical that evening was, how profoundly satisfying, especially for two ex-Marines who had nearly died only blocks from that river so many years ago.

“Later, standing on a balcony of the Mercure Hue Gerbera Hotel, Ken and I looked out over the city and the river bisecting it.  We could see the huge red and yellow Vietnamese national flag flying above the Citadel, illuminated by floodlights, the university that had been used as a refugee center during the battle, the park that had been our helicopter landing zone, the roofs of what had been the MACV compound (Military Assistance Command, Vietnam), even a corner of that building we’d been in when we’d been wounded, now dwarfed by the hotel built around it.  But the streets were crowded with noisy, jostling, energetic people on foot, on bicycles, in cars, in buses, and of course on scooters, scooters, and more scooters.  Vendors hawked postcards and fresh bread and river tours.  The river flowed with colorful tour boats.

“The bridge, with an unbroken stream of motorscooters going in both directions, blazed yellow to green to blue to purple to red and back to yellow.  The Huda beer sign cast a neon ribbon across the water.

For more information:
http://wdehrhart.com/kbea-pages/introduction.html
Posted by Jan Barry at 11:28 PM