A contingent of Veterans For Peace and Military Families Speak Out members from New Jersey joined the Occupy Wall Street demonstration in New York City on Saturday, October 8.
Many in the crowd of young people, older folks who dusted off memories of the protests of the '60s and '70s, and photo-snapping tourists seemed delighted to see the VFP banner unfurled near a corner of Liberty Plaza facing the new office towers being constructed at the site of the former World Trade Center. Among the Jersey contingent was VFP Chapter 21 President Ken Dalton, a Navy vet of the Vietnam war, who worked as a fire fighter in search and rescue operations at Ground Zero in the wake of the Sept. 11, 2001 attack.
A common question of vets by news reporters who stopped by for a comment was “What do war and Wall Street have in common?” Duh. Millions of unemployed veterans and other folks caught in the web of trillion-dollar wars and an economic collapse that the federal bailout of Wall Street banks was supposed to fix could have told them in a New York minute.
Many of the demonstrators in New York on Saturday eloquently stated the reasons for their dismay in an array of hand-made signs, some of which are shown here. 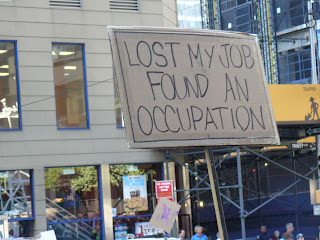 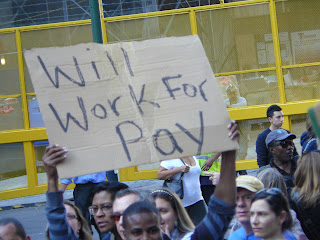 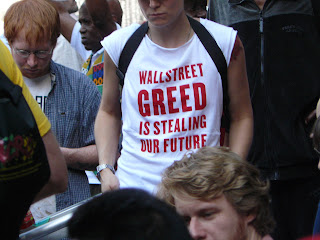