Remarks I gave at “Envisioning Tomorrow,” the Printmaking Center of New Jersey's awards dinner at the Somerville Elks Lodge, Bridgewater, NJ on November 12. The center honored Drew Cameron, the co-founder and co-director of Combat Paper, “a touring project with a compelling mission to use the healing power of art to transform the shattered lives of young veterans.”
I first encountered Drew Cameron three years ago at Rutgers University, where I was teaching a journalism class. He and several fellow Combat Papermakers were conducting workshops at the Brodsky Center in New Brunswick, turning military uniforms into posters and chapbooks of art and poetry, culminating in a jam-packed poetry reading. I went to the first workshop intending to spend a day—and ended up returning all week, intrigued by the interaction of vets, students, art instructors and passersby.
Though my intention was to observe and write about this fascinating project, I was pulled into the middle of it by Drew’s infectious invitation to join in. Presented the opportunity to cut up a desert warfare uniform, I found it very satisfying to disassemble an official symbol of military might. I wished I still had one of my Vietnam uniforms to slice up!
Many veterans have returned from war so angry, disillusioned, disgusted that they threw their uniforms away. After serving in Iraq, Drew decided to slice his war uniform off while filming his defiant act of performance art and turning the startling images into postcards and posters. This angry artwork was hand-printed on paper made of rag pulp from the shredded uniform. The genius of this idea to physically transform a war uniform into primary elements of papermaking art is that it is cathartic, as well as creative.

Through Drew’s networking and prodigious traveling, Combat Paper workshops and their thought-provoking art have appeared at scores of colleges and arts institutions across the USA and overseas. He has planted seeds of this cathartic art in many places and woven a new social fabric linking many war-torn hearts. As Drew notes on the Combat Paper web site: “From each new participant, I take a piece of fabric and mix it into the lineage pulp. This pulp is then mixed in with each new batch of pulp, so a little piece of each vet’s uniform is in every new piece of paper made.”
Another participant in the Rutgers workshops who also was deeply touched by the experience that Drew offers vets is Eli Wright. Eli has followed Drew’s path by serving as Co-Director of the Printmaking Center’s Combat Paper Program. As Eli said three years ago: “We’re all going through many changes in this project… I was a medic. I enlisted in the military to save lives, not take them. … This project saves lives, it gives us direction—to find we can build bridges and tear down those walls and remake sense of our lives.” 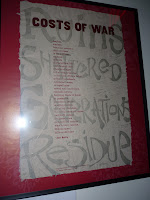 What an arts project—to inspire war veterans to live more creatively. Last year, I dropped by a Combat Paper workshop at the Printmaking Center and ended up hand-making, hand-printing and hand-stitching a chapbook of new poems I wrote, that were inspired by conversations with Drew and other Combat Papermakers. Last winter, I traveled to Buffalo, NY in a snowstorm to work with Drew on a poster for an arts event I was organizing. Here’s the result—a poster designed by Drew that highlights key words in my “Costs of War” poem by using an amazing woodcut design printed on recycled military uniforms.

For such hands-on, hands-down creative work that has inspired so many people through art, I’m honored to present Drew Cameron with PCNJ’s Erena Rae Award in Art and Social Justice!
For more information:
Combat Paper.org
http://odysseus.nervegarden.com/2009/04/10/drew-cameron-combat-paper-project/

Where all those blue people were connected by an
“energy”?

They were able to communicate with plants and
animals?

Well, that is not just a fantasy.

It turns out that kind of “energy” is real.

Deepak Chopra wrote about a study, where scientists
saw monkeys dipping potatoes in saltwater before
eating it.

Then they saw the rest of the tribe doing it.

But get this: Monkeys in different parts of the WORLD
started dipping potatoes in salt water.

There was no way they could have communicated
with each other.

The only explanation was that they communicated
through an invisible, “intelligent energy.”

The Japanese call this energy “Ki”.

It stands for “Life Force”

And this system of healing uses this intelligent energy
to heal people.

It is one of the most ancient, profound and
POWERFUL healing arts in the world.

Reiki masters can HEAL just by touching someone
with their hands.

They can also heal people REMOTELY using their
intention.

It USED to take YEARS and THOUSANDS of dollars
to become a Reiki master.

But this guy named Owen Coleman discovered how
to attain these healing powers rapidly.

Even in as little as 48 hours.

According to him he already had this power, but
don’t realize it. And that’s we don’t have to spend too
much time learning it.

We just need to recognize it and release it.

[Check out his presentation on Reiki here.]

Alright, till next time.

P.S. - Owen is offering a special training that
won't be around forever.

He's planning on releasing his training methods on
a large scale.

But for now, it is invitation only.

So, if I were you, I'd take advantage of that as well.

Look forward to hearing from you!