In the summer of 1942, on his 21st birthday, Alfred Theodore "Ted" Graham, Jr., a trumpet player, volunteer fireman, and newspaper reporter from Jacksonville, New York, enlisted in the U.S. Navy.

After training as an aerial gunner-radioman, ATG was assigned to Bombing Squadron 15, serving on the aircraft carrier USS Essex, which departed Pearl Harbor, Hawaii, on May 2, 1944, for combat duty in the Pacific.

Between flights in dive bombers engaged in battles with Japanese forces over islands from tiny Wake to the Philippines, Iwo Jima to Formosa, "Otto" Graham took copious notes and wrote letters, diary entries, and articles for the ship's newspaper and an aircrew newsletter, commenting on virtually everything--until the morning of November 11, 1944 (Armistice Day), when he was killed in a sea battle in Leyte Gulf.

Among "Gunner" Graham's possessions, shipped home in a small gray box stenciled "Camera Assembly Gun Sight Aiming Point," was a flight log book recording dozens of dive bomber missions, two gray-covered diaries detailing daily life from the state of his bowels to the swirl of battle, photos of himself and friends in flight uniforms and at ease in tee shirts, notes on midnight thoughts, ribald ditties on Navy life, snapshots of Hawaiian good-time girls. Posthumously, he was awarded the Distinguished Flying Cross and numerous other medals. His name was engraved on the flagpole at Camp Barton on the shore of Cayuga Lake, where he had made Eagle Scout.

Ted Graham was my uncle, whose legacy prodded me as I grew up--to be a better Boy Scout, to join the Army and go to war, to be a better writer. It has taken much longer than planned to figure out how to share his war diaries--hastily jotted in pencil and pen and hard to read in many spots--with the public. Then it dawned on me to post what I can on a website, along with other items saved in a family scrapbook. Here are some excerpts from the website--http://atgrahamjr.blogspot.com/--which is a work in progress:

Hand-written notes sent home after he was killed in action:

Man, it seems, is conceived, born unto the world, lives his life, then leaves the world. But man born unto a war world generation may live but only a part of that life, not realizing even the lesser of his dreams. I am of that age and thinking perhaps some chronicler may some day wonder what some of this great group thought, dreamed, cherished and felt. From the war many will live, of course, but they, in their busy life, may take no time to write their thoughts. Hence, this:

For 20 years a man doesn't have much to show--physically. A class ring, pilot's wings, maybe, a cuff link or two ...

I'll take the dames while the rest go down in flames,
I've no desire to be burned!
Air combat's no romance
It made me wet my pants,
I'm just an asphalt Arab I have learned.
You can save the Mitsubishis
For the crazy sons of bitches.
I'd rather have a woman,
Than get shot up in a Grumman.
I wanted wings 'till I got the God-damned things,
Now I don't want 'em anymore!

I'm too young to die
Even in a PBY
That's for the eager not for me!
I wouldn't trust my luck
To be picked up in a Duck
After I'd crashed into the sea.
I'd rather be a bar sop,
Than a flier on a flat-top,
With my hands around a bottle,
Rather than around a throttle.
I wanted wings 'till I got the God-damned things,
Now I don't want 'em anymore!

There is no promotion
On this side of the ocean,
And the guys at home don't really care!
You can have the new style chutes
And those fancy fighter boots,
I'll take comfy slippers and a chair.
You can be a hot shot in a Wildcat,
I'll take the hot-spot in a top hat.
To be the leader of a flight,
Ain't my idea of delight.
I wanted wings 'till I got the God-damned things,
Now I don't want 'em anymore!

At my bit I'm not a chafin'
For the joy of doin' strafin'
I hate the violent use of tail and rudder!
As for livin' like Flash Gordon,
I'll take boating on the Jordan,
I'm a simple soul and all for home and mudder.
You can have your shoulder holster,
I'll take resting on a holster,
And I'll trade my long "pig sticker"
For a tall cool drink of likker.
I wanted wings 'till I got the God-damned things,
Now I don't want 'em anymore!

Hey waiter - bring another round! 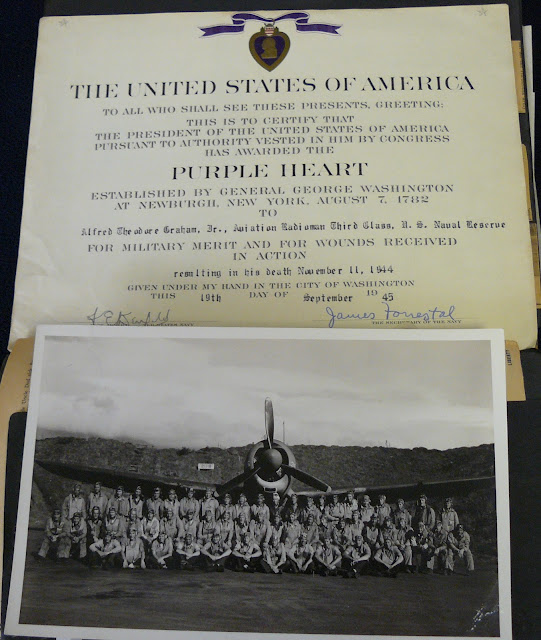 Of the 100 pilots and gunners in VB-15 who sailed to war in 1944, "45 came home unhurt. That was the highest loss rate in any Navy dive bombing unit during WWII," according to research by Steven R. Whitby for his book, "World War II Exploits of Bombing Squadron 15 and the Short Life of ARM2c Stanley Nelson Whitby while Flying from the USS Essex (CV-9) in 1944."

Losses for Air Group 15, which VB-15 was attached to along with fighter planes and a torpedo-bombing unit, were "Pilots: 43 killed or missing and 12 wounded. Crewmen: 29 killed or missing, and 13 wounded," according to "Pacific Champions" by Morris Markey in Liberty magazine, May 26, 1945.