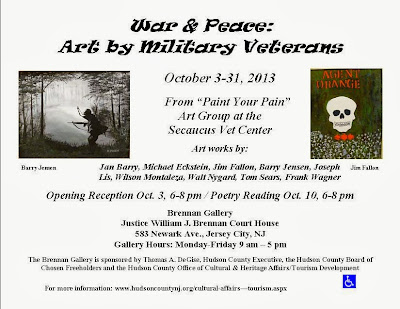 An array of art drawn from war veterans’ lives will be hosted throughout October by the Brennan Gallery in the Justice William J. Brennan Court House, 583 Newark Ave., Jersey City, NJ 07306. The art gallery in the court house rotunda is open Mondays through Fridays from 9 a.m. to 5 p.m.

Artists with works on display include Jim Fallon of Hoboken, Joseph Lis of Union City, Michael Eckstein of the Vietnam Veterans of America State Council in Bayonne, Frank Wagner of Bogota, formerly of Jersey City; Toms Sears of Washington Township, formerly of Jersey City; Jan Barry and Walt Nygard, both of Teaneck; Barry Jensen of Lincoln Park, and Wilson Montaleza of Lodi. Montaleza served in the US Army in Afghanistan and Iraq. The other veterans served in Vietnam in the Army or Marines.

Guided by Angela Maio, LCSW, BCETS, BCD, a Family Therapist at the Secaucus Vet Center, participants in the “Paint Your Pain” Art Group have explored a variety of media, from water colors to oil paintings, to probe, uncover and convey hard-to-express experiences.

According to Maio, “After many years of doing talk therapy with veterans, I realized that another more powerful outlet was needed.  The ‘Paint Your Pain’ Art Group has had a healing cathartic effect on participants’ combat stressors.  Several members have expressed the feeling of finally finding closure to their nightmares and to the Vietnam War.”

“This is art from the heart of darkness, in many cases, drawn from still startling war memories,” said Jan Barry, one of the participants, an author and editor of several collections of poetry and art by veterans, who served in Vietnam. “Other pieces commemorate facets of homecoming, from intensely memorable soothing scenes to troubling legacies such as the health toll from Agent Orange.”

Jan Barry: Born in 1943 in Ithaca, NY. Retired newspaper reporter (Bergen Record), poet and author, books include Life After War & Other Poems (Combat Paper Press) and (co-editor) Winning Hearts & Minds: War Poems by Vietnam Veterans, among other works. Served in Vietnam (Dec. 1962-Oct. 1963) in US Army aviation unit. Graduated Ramapo College of New Jersey, BA in Political Science. A college journalism instructor, he’s active with Combat Paper and Warrior Writers workshops for veterans and family members. His Combat Paper art has appeared in exhibitions from Reno, Nevada to Washington, DC to Teaneck, NJ, where he rests his head between war bulletins, rumors of war, ambulance sirens and other alarms.

Michael Eckstein: Born in The Bronx, NY. Currently retired and living in Hopatcong, NJ. Served in US Army from 1965 to 1967 with a year in Vietnam at Tay Ninh, Xuan Loc and Cam Ranh Bay. Life member of Vietnam Veterans of America Chapter 327 and chairman of NJ State Agent Orange/Dioxin Committee, life member of DAV, member of Jewish War Veterans and VFW. Served as a commissioner on the New Jersey Agent Orange Commission, member of Admiral Zumwalt’s Agent Orange Coordinating Council. Married for 45 years, with 3 children and 3 grandchildren.

Jim Fallon: Born in Hoboken and raised in Jersey City, NJ. From 1963 to 1969, I was an Army Reservist in New York City while bartending and exploring my skills as a jazz drummer. As a Medic with the Army Reserve Medical Field Hospital Unit, I was activated in 1968 and sent to Vietnam. Our Unit was in charge of a POW hospital at Long Binh treating wounded Viet Cong and North Vietnamese Army soldiers. Our Unit was also involved with a Vietnamese orphanage. We brought food, toys and extra medical supplies to the children, who were always excited to see the Army Medic and his truck with the big Red Cross bringing supplies.

After serving in the Vietnam War, I returned to bartending, jazz clubs and was an active Union Representative. For a period of time, I owned the Half Note Jazz Club in NYC. I have been an active member of many Veterans’ organizations, including Vietnam Veterans Against the War, Veterans For Peace, Combat Paper, Secaucus Vet Center and LZ Hope. I am a Service Officer for the Disabled American Veterans and belong to several PTSD support groups.

Wilson Montaleza: Born in Ecuador in 1985. Served in US Army with A Co., 2-4 Infantry, 10th Mountain Division at Mizan, Afghanistan for eight months in 2006-2007, and in Iraq at FOB Falcon for 15 months in 2008-2009. Currently a student at Montclair State University majoring in dietician studies. Resides in Lodi, NJ with his two cats and 3-year-old son.

Walt Nygard: Born in Portland, Oregon and raised on U.S. Army posts of the American West and in Germany. He is a U.S. Marine Corps veteran of Vietnam, Okinawa and the Philippines, 1969 – 1970. Following graduation from the University of New Mexico – English/Art – Walt managed the legendary Albuquerque saloon, Okie's Rathskellar. With the end of the 70's, Walt found himself with a family, a blue-collar writer and artist living in New Jersey.

Walt started a series of veteran's poetry readings at the Puffin Cultural Forum in Teaneck, NJ in 2008. Featured in the New York Times, the series presents prose and non-fiction as well as poetry, spoken word, music and gallery art by veterans young and old. Since 2011, Walt has been active with Combat Paper NJ. Working as a paper and printmaker, he's honored to work with younger veterans, assist at workshops and to exhibit his art. Walt's oldest son is a veteran of both the Afghan and Iraq Wars.

We are also looking for a few good Artisans! So if you create anything and you are a military Veteran or a supporter of our Veterans, then check us out!