Legacy of Winning Hearts and Minds 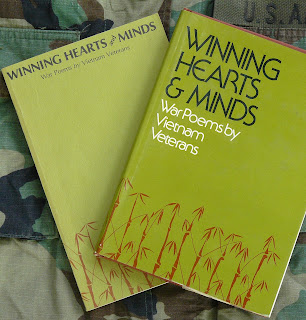 As one of the editors, publication of a collection of poetry by war veterans was a major highlight of my life in 1972. How it fit into the larger poetry scene and the arc of American life I'll leave to others to determine. A very interesting perspective by a British writer who recently explored the legacy of that poetic act is conveyed in the current issue of War, Literature & the Arts.

Here is an excerpt from “And the fire still burns”: Vietnam War Poetry, Moral Witness, and Winning Hearts and Minds by Adam Gilbert.

"Forty years after its publication, Winning Hearts and Minds: War Poems by Vietnam Veterans remains one of the most compelling, insightful, and moving accounts of the American war in Vietnam. A key work of witness of the twentieth century, this poetry anthology of over one hundred pieces, written by thirty-three contributors, testified to the disaster of what was then America’s longest war. Although the current conflict in Afghanistan has now claimed that grim record, and along with its sister war in Iraq has generated a fair amount of debate, the war in Vietnam is still America’s most controversial and contested military campaign. Winning, and the body of “Vietnam war poetry” that it helped to establish, presented a searing critique of the war by those who had fought in it, a critique that continues to offer a valuable opportunity to understand and examine “America’s policies and attitudes towards Asia through the eyes of the men who implemented them.” This article presents an overview of the history and legacy of “the seminal anthology against which all future Vietnam war poetry would be judged”, and outlines how the collection can be viewed as a particularly powerful and perceptive case of moral witness. Four decades on, now is an appropriate moment to consider the legacy of Winning, to see where it came from and where it led to, and to start to come to terms with its profound and enduring moral significance.

"Whilst interesting and penetrating analyses of Winning can be found in works such as Michael Bibby’s Hearts and Minds: Bodies, Poetry, and Resistance in the Vietnam Era, Subarno Chattarji’s Memories of a Lost War: American Poetic Responses to the Vietnam War, or Lorrie Goldensohn’s Dismantling Glory:Twentieth-Century Soldier Poetry, the actual story of its publication, placed in a literary-historical context with particular attention given to its antecedents and successors, has not been investigated as thoroughly. The fullest account of the anthology’s publication, Caroline Slocock’s “Winning Hearts and Minds: The 1st Casualty Press”, is a helpful description of the painful publishing process faced by the collection, but does not give much consideration to what came before or after. Furthermore, since Slocock’s article was released in 1982, it did not have the benefit of being able to assess the long-term legacy of the anthology. This study utilises the material available to Slocock and brings the story up to date with additional information from the newly accessible Jan Barry Archive at La Salle University and recent interviews with some of the key poets. By examining the forerunners and descendants of Winning, as well as the volume itself, we can begin to appreciate the importance of its role in the history of Vietnam war poetry. ..."

To read the full article:
http://wlajournal.com/25_1/Default.aspx

E.B. "Del" Rosario out of the Seattle VVAW Chapter (71-72), shared this book with me. Who owns the copyrights, now?