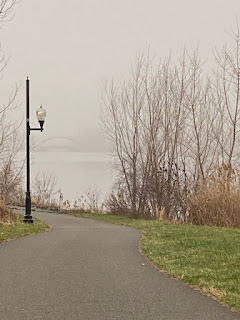 
The fall 2020 semester at Ramapo College opened in the midst of global crisis due to the Coronavirus pandemic. Only a few students and faculty were allowed on campus, primarily for lab courses. Most classes were held online. Despite precautions, COVID-19 swept through my World Sustainability class of 31 students and their families. Suddenly the concept of studying global environmental and social crisis was no longer theoretical.

The possibility of impending catastrophic climate change took on a new perspective, as within a few months the United States of America staggered from a once-in-a-century public health crisis that triggered economic collapse in much of the world’s trend setting economy. In many ways, our society seemed to be wandering in a fog.

Probing discussions were stirred up and guided by fellow World Sustainability professors Harriet Shugarman and Amanda Nesheiwat and environmental activists Paula Rogovin and Sam Difalco, who joined the class via Zoom. The entire class attended an online conference on youth climate activism and the presidential election hosted by Ramapo Green, a campus environmental group. Students were also encouraged to write about what they learned from their experiences.

Here’s a selection of their work in the midst of the COVID crisis:


My husband was diagnosed with early onset Parkinson's disease at 57.his symptoms were shuffling of feet,slurred speech, low volume speech, degradation of hand writing, horrible driving skills, right arm held at 45 degree angle, things were tough for me, but now he finally free from the disease with the help of total cure from ULTIMATE LIFE CLINIC, he now walks properly and all symptoms has reversed, he had trouble with balance especially at night, getting into the shower and exiting it is difficult,getting into bed is also another thing he finds impossible.we had to find a better solution for his condition which has really helped him a lot,the biggest helped we had was ultimate life clinic they walked us through the proper steps,am highly recommended this www.ultimatelifeclinic.com to anyone who needs help.